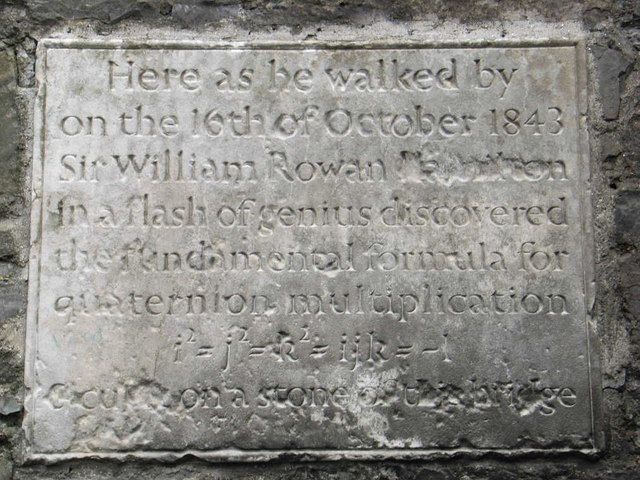 Tuesday, October 16, 2018, is the one hundred and seventy-fifth anniversary of the discovery of quaternions, one of the most difficult discoveries ever in the history of mathematical physics.  The discovery was made — in a sudden moment of inspiration following 11 years of studious toil — by Sir William Rowan Hamilton as he was crossing Brougham Bridge, in Ireland, with his wife.  On the spot, or so it is said, he carved his famous equations on the bridge.

They started into life, or light, full grown, on the 16th of October, 1843, as I was walking with Lady Hamilton to Dublin, and came up to Brougham Bridge.  That is to say, I then and there felt the galvanic circuit of thought closed, and the sparks which fell from it were the fundamental equations between I, J, K; exactly such as I have used them ever since.  I pulled out, on the spot, a notebook, which still exists, and made an entry….

Although Hamilton’s original inscription does not survive, the plaque shown above hangs on the bridge to this day in commemoration both of Hamilton’s discovery and of his sudden inspiration. The plaque reads:

Here’s to Hamilton, to quaternions, to bridges, and to inspiration!